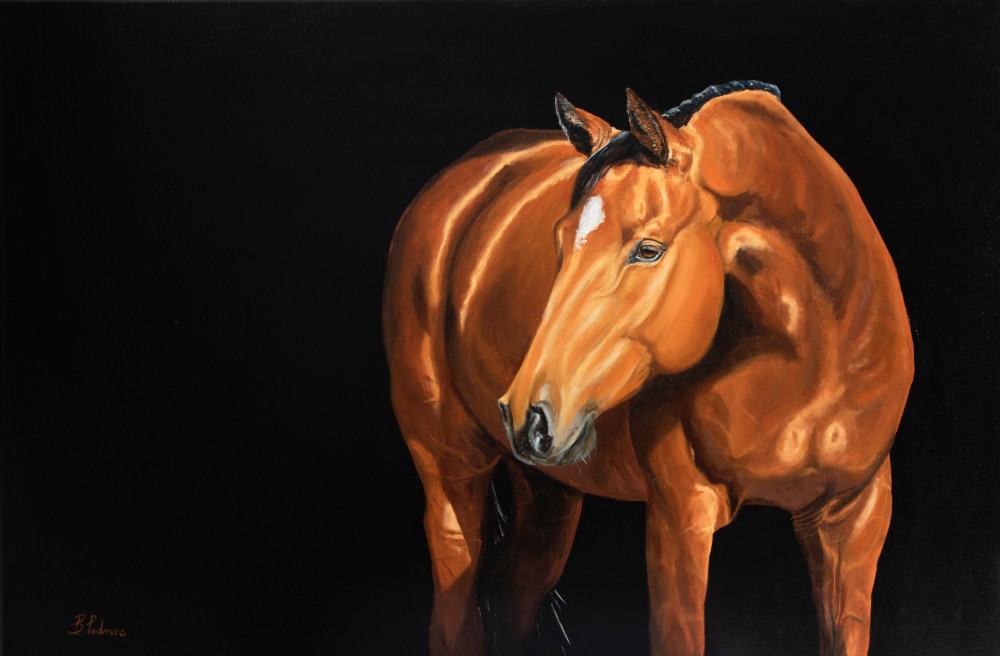 I am an artist.

I am an artist because of my Grandmother.

She was not the usual kind of cuddly Granny who dotes on grandchildren, she didn’t actually like children at all. I remember someone saying about her that she was a Man’s woman. She liked men, not other women or children. She was small and spunky, with dyed red hair and green eyes. She dyed her hair because she said that she had been a red-head all her life, and nothing was going to change that, not even age. In my troubled teens, I asked her if it was true that men preferred blondes (I’m brunette myself). “They prefer red-heads,” she said, “and I should know…”

When my brothers and I were taken to visit my grandparents, we stayed out of their way, while the grown-ups socialized over gin, taken in conjunction with pickled onions, biscuits and cheese.

One Christmas, when I was about eight, I was sitting on the floor behind a sofa, colouring in a picture of flowers in a colouring book. My Grandmother walked past, noticed what I was doing and picked up my coloring book. She got a blue pen off a nearby table and scribbled some ink shadows on my drawing.

“You need to do dark shadows like this” she said. I nodded dumbly, rather outraged at her scribbling on my picture, but too afraid to show it.

“Yes, I do,” I replied, really meaning it. I spent a lot of time trying to draw, mostly animals and mermaids, as I recall.

“Right,” she said, “You can come and stay with me for a week in the school holidays, and I will teach you.”

So began the times that were the highlight of my childhood and teenage years. I stayed with my Grandparents one week every school holiday, up until the time I started working.

Those times at my Grandparents were a lifeline to me. School mostly felt like an uphill battle. I discovered that I am dyslexic when I was studying psychology, but in my childhood, it was not a recognized condition. I was just told that I was lazy and just needed to work harder to improve my handwriting, learn my spelling, and do my maths. Art was the one thing that I was good at, and my Gran was the only person who saw that, and helped me.

Another reason that I loved those times at my Grandparents, was that my father was an alcoholic, and most of the time my home life felt like a minefield, with all of us tiptoeing around trying not to set off an explosion. I yearned for the holidays to come, counting down the days until I went.

Being British and old-fashioned, my Grandparents had a strict routine. Cooked breakfast at 8, at which my uncle Roy would join us after his morning stable routine. He is a racehorse trainer, and at that time, his stable yard adjoined my Grandparent’s property. Then Gran and I would go out of the house to the small studio, which used to be a chicken shed. We would paint until tea time, and if we were too engrossed and were late, my Grandfather would come and stand silently outside the door until we noticed him. Gran would swear under her breath, and go and make tea. Eye-wateringly strong, dark orange colored tea, taken from the trolley in the lounge, with one biscuit. Then we would retreat to the chicken shed and resume. Gran painted mostly impressionist flower arrangements using oil paints. She had been a florist until she retired and took up painting as a hobby. I mostly did pastels.

Gran never treated me as a child. I was a fellow artist, and she related to me as though I were an adult. I had long hair which I struggled to do by myself, but she never offered to help me, so by the end of the week, it was a tangled mess, which didn’t bother either of us. She let me choose from among her books and photos, and told me to make copies of what I liked, and gave me free access to all her art materials.

We were companions sharing a passion to create. She had had very few lessons herself, so we both muddled our way along. I didn’t get to do art at school, so Gran taught me what little she knew, and taught me the most valuable lesson of all – that it is possible to teach yourself, by reading and trying new things. I still am on that learning journey, only now I use YouTube more than books.

Once, when I was a teenager, I said to my Gran that “I don’t feel like painting today.”

“Feelings have nothing to do with it,” she said, “Sit down and do some work.”

So I did, and produced the best work I had done up until then.

That is another lesson that has stayed with me ever since. Artists have to be self-motivated, which can be very hard. I am good at what I call PAB – Painting Avoidance Behaviour. There are many days when I have to tell myself “Feelings have nothing to do with it, sit down and paint.”

Lunchtime would come and Gran would go and cook lunch. Mostly stews with mashed potatoes, and boiled cabbage, followed by tinned fruit and custard. Occasionally it would be the detested beef and kidney stew. I would pray for no kidneys, and would have to silently choke down any that landed on my plate. I didn’t dare complain. My Grandfather had been a prisoner of war in Poland for most of the Second World War, and had come back a scary man. I was terrified of him, and was on my best behaviour the whole time I was with them.

After lunch, the Grandparents would nap in their chairs in the lounge, and I would head down to my Uncle’s stables. I adored the horses, watching their exercise routines and grooming with absorbed fascination, feasting on their loveliness. Horses still epitomize beauty for me. The stable yard was full of the sound of doves, drawn by the grain from the straw, and to this day, the sound of doves cooing and the smell of straw take me back vividly. The evening routine would come to an end, each horse withdrawing into it’s stable to eat. I would give the stable cat a last stroke, and walk back to my grandparents’ house, for supper of pilchards on toast, or some other food that I never ate at home.

After supper, Gran and I would play scrabble, even though neither of us could spell. Then I would politely wish them goodnight and go to my bedroom in the old house, with its bedside lamp casting glowing shadows on Gran’s paintings of roses hung on the walls. I would climb into the high, old fashioned bed, with its starched sheets and hollow center, already looking forward to the next day.

Those days had the light of eternity on them. They remain glowing and beautiful in my memory. They were a strand of light in the darkness of my home life. My Gran taught me that I love to create, and will do so until the day I die. The smell of turpentine still reminds me of her, and every day that I paint is because of her. If she had not seen the spark and helped me to fan it into a flame, I would never have had the courage to become a painter.